How is the Plan being developed ?

Coordinated by the Scientific Committee on Antarctic Research (SCAR), the Southern Ocean Task Force launched a series of workshops & meetings to identify key research priorities for the Southern Ocean – the first of which was held in February 2020 in San Diego (USA). The full report of this first workshop can be found here.

During the spring of 2021, the Southern Ocean Task Force conducted an extensive desk study to collect information from partner’s implementation plans, as well as previous polar and Antarctic initiatives, including the SCAR Horizon Scan, the Antarctic Roadmap Challenges led by the Council of Managers of National Antarctic Programs (COMNAP), and the outputs of the EU-PolarNet consortium. This desk study generated a review of identified strategic and scientific priorities for the Southern Ocean, published in May 2021.

The next step consisted in engaging stakeholders in an open survey to gather insights on the review. Participants provided input on the activities and contributions that should be developed in the context of the Decade. Working Groups were set up for each of the Decade Outcomes. Each Working Group is chaired by key experts from academia, government or industry, with working group participation open to all interested parties to ensure the broadest representation. Southern Ocean challenges and ensuing actions were identified to develop concrete strategies. The input from each Working Group was synthesized into separate Working Group reports which served as a basis for the Southern Ocean Action Plan.

The development process of the Southern Ocean Action Plan engaged a broad community spanning the scientific research community, industry, infrastructure (National Antarctic Programs, logistics coordinators), policy and management, operational service providers and Antarctic scientific and policy governing bodies. This inclusive approach is a key pillar of the Southern Ocean contribution to the UN Ocean Decade, and will be prioritised throughout its implementation. 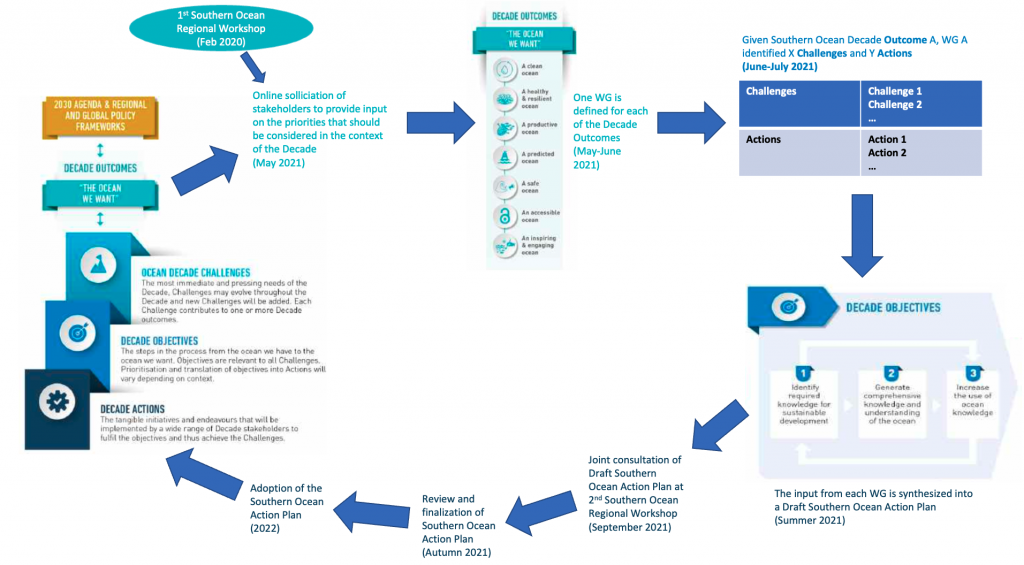